Whether you’re going to a pro game, playing one-on-one with a friend, or watching the game on TV, we’ve got you covered! Get Your SPORTFREAK On!

Back in the day when boring apparel dominated the planet, an avid sports fan had a vision. He was at an empty stadium cheering from the bleachers when the Gods of SPORTFREAK appeared.

From the 50 yard line seats in front of him, they turned around and shouted, “What up Dawg? We’re tired of you wearing the same old worn out threads. Let us hook you up with somethin’ to wear that rocks, bro’! That’s when the idea for SPORTFREAK fan-apparel designs hit him on the head like a line drive. That, my friends, is how the SPORTFREAK shirt came to be. Direct from the SPORTFREAK Gods themselves, now available to mortals. 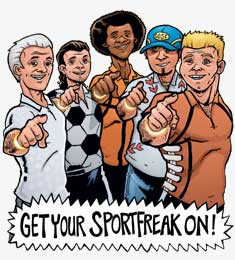 SportFreak Pronunciation: spört’frëk
n. 1. One who craves sports and watching sports or anything having to do with sports.